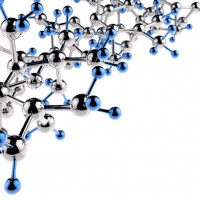 By Lynn O'Shaughnessy on December 7, 2012 in Academics, Graduate degrees

I hear from a lot of parents who assume that their children will eventually go on to graduate school. And that’s hardly surprising since Americans who earn a master’s degree or a doctorate typically earn more in their lifetimes than the rest of us.

For those who dream that their children will someday earn a PhD, I want to direct you to the newest annual survey released this week by the National Science Foundation that contained a huge amount of information about doctoral recipients.

Coincidentally, two days ago I attended the PhD  qualifying exam of my daughter’s boyfriend, who is pursuing his PhD in robotics and mechanical engineering at the University of California, San Diego. It was quite an honor to watch Nick, who earned a bachelor’s in mechanical engineering at Carnegie Mellon University, present his research work to a panel of brilliant engineering professors at this elite research institution. (My only role was bringing the refreshments.)

I understood little of what Nick said, which isn’t surprising considering that some of his mathematical computations filled entire Power Point slides. Nick passed the exam which means he is at a stage in his PhD that’s referred to in the higher-ed world as ABD (all but the dissertation.) He expects to have his dissertation completed in a year.

Statistics on the Latest PhD’s

Pursuing a PhD is a long, tough road and it can feel like a dead-end if the goal is to become a tenured professor. As my recent blog post noted, most professors are adjuncts. Here are some of the highlights of the study: 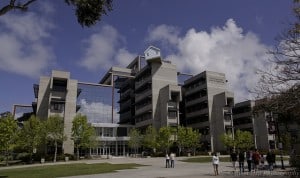 UCSD Jacobs School of Engineeringthat I’ve picked out of the NSF report:

1. Last year, 49,100 Americans earned a research doctorate from one of 412 universities.

3. The numbers of doctorates in education and humanities has declined over the past decade. Last year, only 9.6% of the doctorates were in education, 10.6% in the humanities and 5.8% in other non science/engineering fields.

4. More than one out of three doctorates were earned by foreigners holding temporary visas. Over the past decade, 85% of doctorates earned by these foreign students were in the sciences and engineering.

5. Women have earned a majority of doctorates awarded to U.S. citizens and permanent residents in every year since 2002. 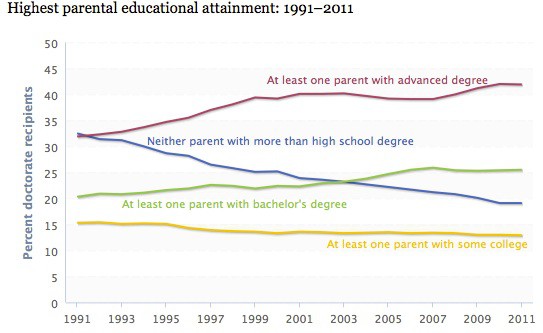 8. Considering how long it takes to obtain a doctorate, it’s a good thing that many students aren’t picking up much of the tab. Few doctorate recipients in the life sciences, physical sciences and engineering had to pay for their education. Only 4% of PhD’s in the physical sciences and 4.5% in engineering had to pay for their doctoral education. PhD students typically serve as teachers and research assistants in exchange for their education. In contrast, nearly 50% of the education PhD’s had to pay. 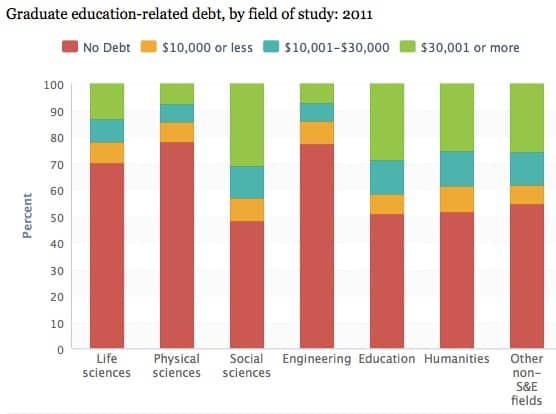 10. So what’s the job situation for PhD’s? Not that great and especially for the non-science and engineering doctorates, according to the NSF study. The number of doctoral recipients who reported having a job or postdoctoral position dropped to its lowest level in a decade.

Sixty four percent of new engineering PhD’s had secured a job or postdoc opportunity versus 72.5 percent 10 years ago. In the life sciences, 62.5 percent of PhD’s had something lined up versus nearly 73 percent in 2001. 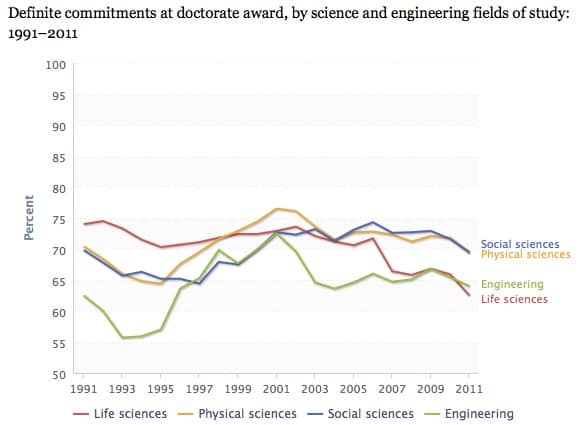 The jobs and academic opportunities for other doctorate recipients was worse. In fact, the percentage of PhD recipients with  jobs or academic gigs waiting for them were lower than at any point in the past two decades. 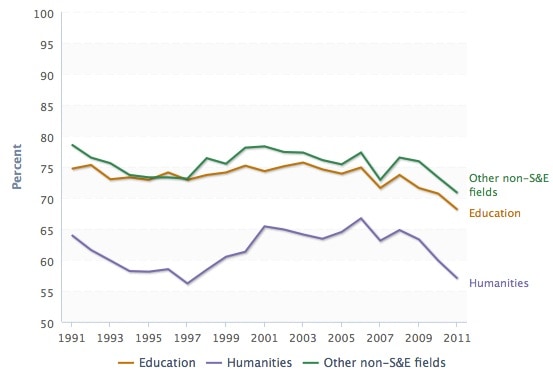 Here are some past posts that I’ve written that are related to PhD’s:

50 Schools That Produce the Most Science and Engineering PhD’s

12 Reasons Not to Get a PhD

2 Responses to A Look at America’s Newest PhD’s