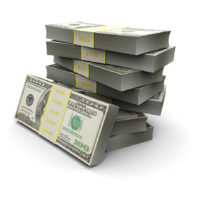 College sticker prices are often meaningless because most students at state and private universities don’t pay it.

Published prices, however, can be a helpful starting point when exploring what kind of price break, in the form of scholarship and grants, your child might get at a particular institution.

Your teenager receives a $15,000 annual merit award at two universities. While the award is identical, the impact of the scholarships can be significantly different when the sticker prices vary.

Now let’s look at the dramatically different net prices after deducting the $15,000 scholarship from each school.

While there are certainly exceptions, looking at schools with a lower sticker price will often lead to lower net prices.  Consequently, families should strongly consider including lower priced schools in their hunt.

An easy way to obtain sticker prices is through a valuable tool that The Chronicle of Higher Education created. While much of the content on The Chronicle’s website is only available to subscribers, the database of college prices is available to anyone.

Here is a screenshot of the tool:

What you can do with the cost tool

Using The Chronicle tool, you can sort schools by price in a variety of ways including these categories:

To show you what you can obtain, I generated a list of private four-year colleges in Massachusetts. I ranked the private schools by their total price. The in-state total price will be the same as the out-of-state total because private institutions, unlike state universities, don’t charge more for students who live outside their state borders. 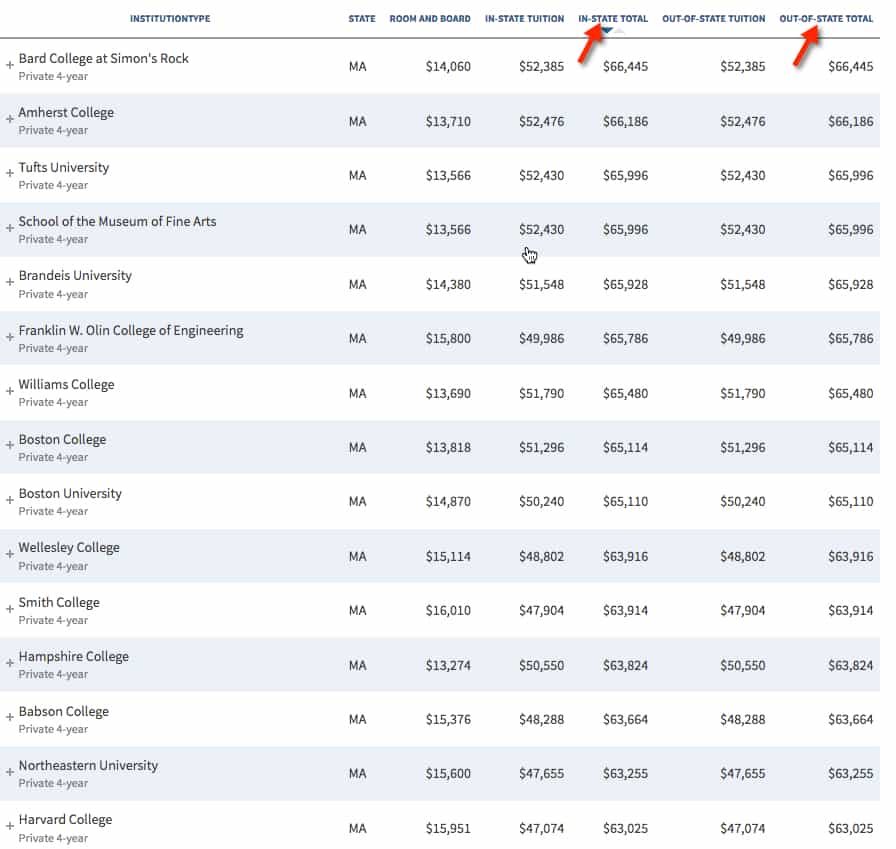 Using the cost tool, I was able to demonstrate one of the realities of college pricing: schools that enjoy higher rankings from U.S. News & World Report can charge more and often do.

Families that want the sticker price and the net price to be lower should include schools in their search that are perched on lower rankings rungs.

Here is an example from my own extended family:

My nephew Matt graduated last year from Westminster College in Fulton Mo, a liberal arts college. The tuition and room/board is currently $34,020. Ninety-seven percent of the students at Westminster don’t pay full price. The average merit scholarship is $13,636 and the average need-based award is nearly $18,524.

Matt thrived at Westminster where he made friends, enjoyed small classes and benefited from attentive professors.

My son Ben had an equally great experience at Beloit College, where the price tag is higher.

The net price for someone who qualified for the average merit scholarship from Westminster would be $20,384 versus $31,547 for a Beloit student who snagged a scholarship.

And what about the schools, particularly on the coasts, that sport sticker prices that are an additional $10,000 to $15,000 more a year than Beloit and other non-coastal schools?

I would suggest that the education students receive at Westminster will be quite comparable to Beloit’s.

I’d argue that a big reason for the price differential is U.S. News & World Report’s college rankings. Beloit is ranked as the 62th best liberal arts college and Westminster is ranked as No. 149th.

Families looking for bargains are more likely to find them if they search lower in the rankings.

To test out my suspicion about rankings and tuition prices, I used The Chronicle’s online database to check the 2016-2017 tuition prices in Ohio, which has a large number of private institutions that must compete for students in a state with a declining population of high school students.

As you can see from the above list, there is a huge difference in tuition price between Oberlin (the priciest school in Ohio) and Hiram, which is one of the 40 liberal arts colleges featured in the best-selling book, Colleges That Change Lives. (There are wonderful liberal arts college ideas in the book.)

When I looked more closely at the list, I discovered that the tuition prices and rankings were highly correlated for U.S. News’ two premier ranking categories – national liberal arts colleges and national universities. 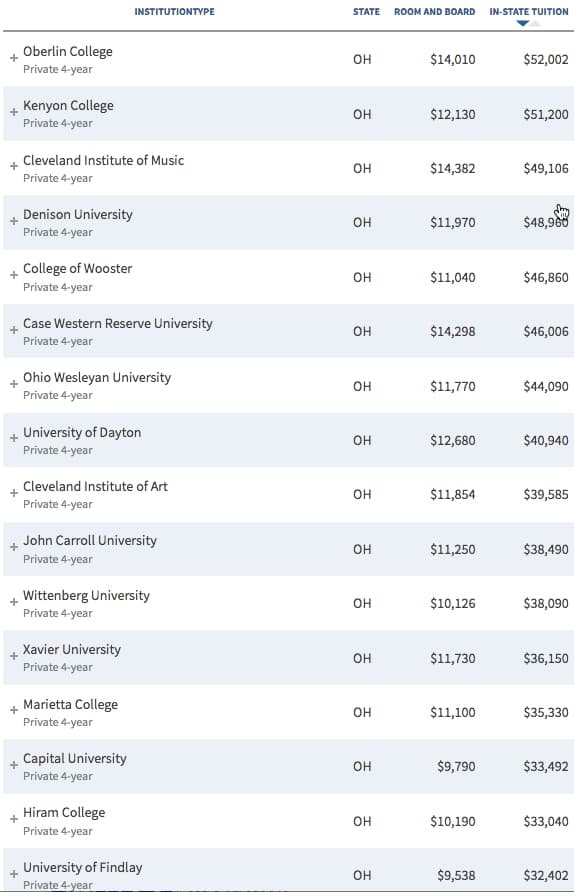 First, let’s take a look at the Ohio liberal arts colleges on the above list. Their rank by cost lines up exactly with their U.S. News ranking:

There were only two private Ohio schools in the national university category in the above list, but the tuition prices were also aligned with their rankings.

Prices off the coasts

The Chronicle database also illustrates another trend that I’ve written and talked about many times.  Universities  on the coasts and particularly in cities can often charge a premium because of their location.

I also took a look at the seven private Pennsylvania institutions in the national university category and detected the similar pricing pattern. The two top-ranked schools – the University of Pennsylvania and Carnegie Mellon University – charged the most. The top four ranked university in Pennsylvania cost considerably more than the other three.

What about state university pricing?

I could have used The Chronicle’s database to focus strictly on state schools and college rankings, but I didn’t because pricing is heavily impacted by state appropriations and politics and, in some cases, state governments approve tuition hikes.

Most expensive state universities for nonresidents

The list below shows the state universities that charge the highest out-of-state total cost for nonresidents. 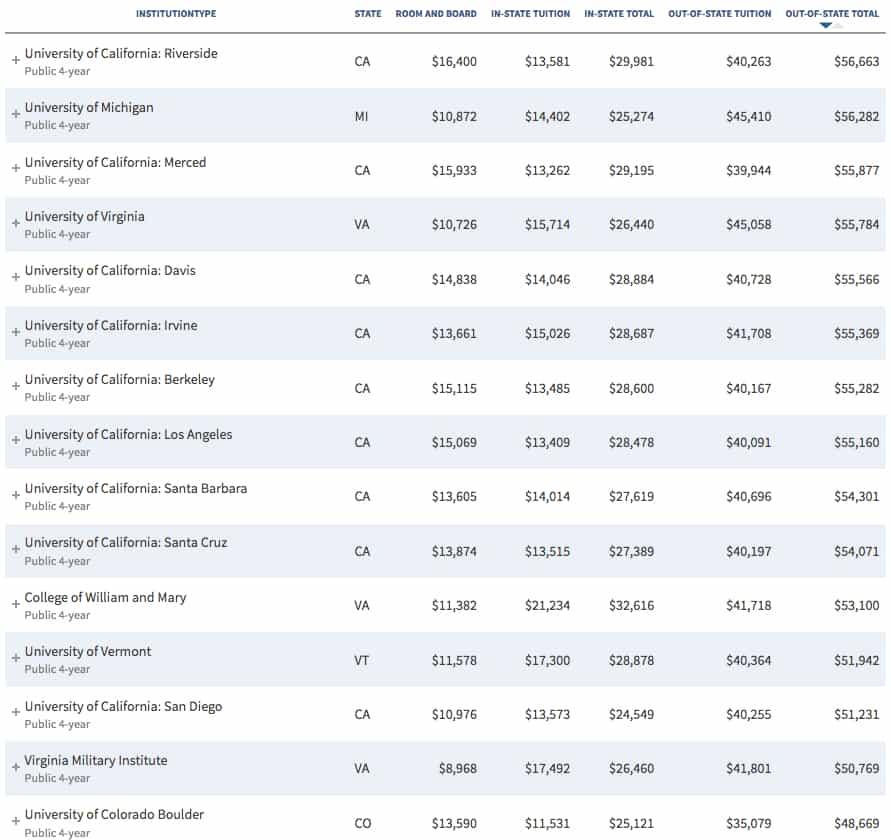 Clearly there are more issues involved in picking a school than price. And a school with a lower price tag isn’t going to be so affordable if a child can’t graduate from the institution in four years. You also don’t want your child to be surrounded by students who aren’t very motivated. Families need to do their due diligence.

That said, I’d argue that parents should examine their prejudices about what schools are worthy of consideration and which aren’t. There are wonderful education opportunities at many colleges and universities regardless of what U.S. News might think of a school.

A great education can be found at many colleges and not just among US News’ anointed. There are many hidden gems out there and if you want to cut the price of college, I’d start looking for them.

When on the hunt for colleges, I’d pay close attention to the quality of the academic department(s) that interests your child the most. Here is a post I wrote about this subject last year:

I will be launching my online course, The College Cost Lab in mid to late June. If you’re interested in learning more when I have details available, please click here!

Success Story! Saying No to a Dream College
How To Tell if a College Will Go Bust