By Lynn O'Shaughnessy on June 6, 2012 in Evaluating Schools, Research

When I give talks about finding and affording colleges in California, the audiences often gasp when I share grad rates for some extremely popular state schools. Here are some of the four-year grad rates that shock parents:

These low rates are hardly just a phenomenon of California. Here are grad rates of just a few of the countless universities across the country with poor four-year grad rates:

It’s easy to dismiss poor grad rates as a reflection of a school’s selectivity.  A public university that has a mandate to accept most of its applicants will possess a much lower grad rate simply because of the students it attracts. Schools that educate a wealthy student body should possess much higher grad rates. Is anybody going to be surprised that Princeton University’s four-year grad rate  (90.1%) is much higher than another New Jersey institution – Rutgers University in Camden (32.1%)?

What is surprising is the grad-rate variation among schools that attract similar student bodies. For instance, if you are looking at flagship public universities that draw top-performing students in their respective states, you would expect the rates to be similar. If you are looking at academically rigorous private liberal arts colleges, for example, you would expect that their grad rates would be similar. That, however, is not the case.

You can discover wide disparities in grad rates among similar institutions by heading over to College Result Online, which is my favorite source for graduation rates. At College Results Online, which is brought to you by the Education Trust, you can obtain a college’s four, five and six-year rates by just typing the name into the search box.

One of the features that I particularly like about College Results Online is that the site will generate the names of peer institutions for you so you’ll get  a sense about whether a school’s grad rate is good or not for the company it keeps.

The cool part about the site’s software is that you don’t have to know what a school’s comparable institutions are. Simply hit the Similar Colleges button when you are looking at a school’s profile. I am demonstrating what the software can do by using American University in Washington DC. 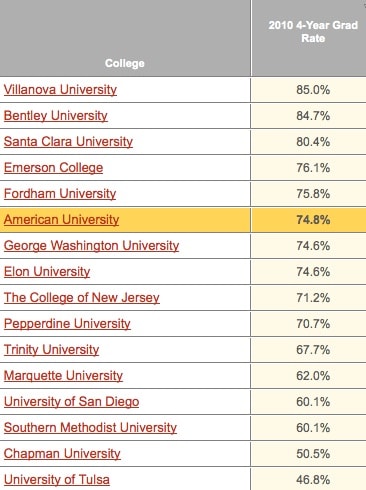 Among this peer group of  private universities, you can see that American U. is closer to the top of the list. What I find most interesting in this example are the laggards. University of Tulsa and Chapman University in Orange County, CA, have significantly lower grad rates than their peers. This is something you would want to investigate before applying to these schools. These are expensive schools and I would not be interested in my child attending a school where the odds of graduating in four years was iffy.

Another Feature of College Results Online

You can also research school graduation rates by developing your own criteria by using the site’s Advanced Search tool. You can generate lists of schools based on such criteria as location, type of institution, selectivity and freshman retention rates.

Lynn O’Shaughnessy is the author of the second edition of The College Solution: A Guide for Everyone Looking for the Right School at the 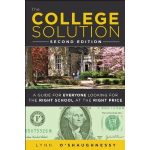