By Lynn O'Shaughnessy on May 17, 2012 in College Costs, Financial aid, Money, Scholarships

When you take into account all the sources of college aid that are available to students in this country, roughly nine percent comes from state governments. Recently that amounted to $9.2 billion.

How states dispense this aid varies significantly. While nearly all states are strapped for cash, some are far more generous than others to college students. The requirements for who qualifies for the cash is also all over the board.

Families with smart children are happy if they live in a state that doles out money based on merit. Often the teens who have higher grade point averages and test scores can win state grants regardless of whether they have the ability to pay for college. In contrast, families with low and moderate-incomes are more likely to benefit if they live in states where all or the majority of money is based on the financial need of the household.

Financial aid practices in all 50 states

The Brookings Institute just released a report that explores the financial aid practices of all 50 states. You don’t have to read between the lines to appreciate that the researchers who worked on this report — and it relied on some real heavy hitters  – aren’t happy with states that link the majority of their college grants to merit.

Most of the states which reward affluent students through their aid policies – and stiff many lower-income kids – are primarily in the South. The worst offender is Georgia which dispenses all its college grants based on merit. I guess if you’re a poor kid in Georgia and you don’t meet the requirements for a state merit scholarship, good luck paying for college!

In the chart below, you can see a bunch of interesting statistics. The left-hand column, for instance, shares what percentage of adults in each state have earned at least a bachelor’s degree. The next column indicates how many students attend college in their own state. California has the highest percentage of students who don’t cross state lines for college (93%), which I found that fascinating. In my talks around the state (I have one today in Costa Mesa), I will continue to urge California teenagers to look beyond their own state for great financial and academic fits.

The average grant in some states such as Alaska, Arizona and New Hampshire is incredibly low. According to the report, New Hampshire and Michigan fall into the worst possibly category: high tuition/low financial aid states. Alaska, as well as Utah, fall into the low tuition/low aid category. New Jersey and South Carolina fit into the high tuition and high aid category while West Virginia and Louisiana’s policies are characterized as low tuition/high aid.

In the second and third column from the right, you can see what percentage of state aid is based on financial need and what the average grant is. 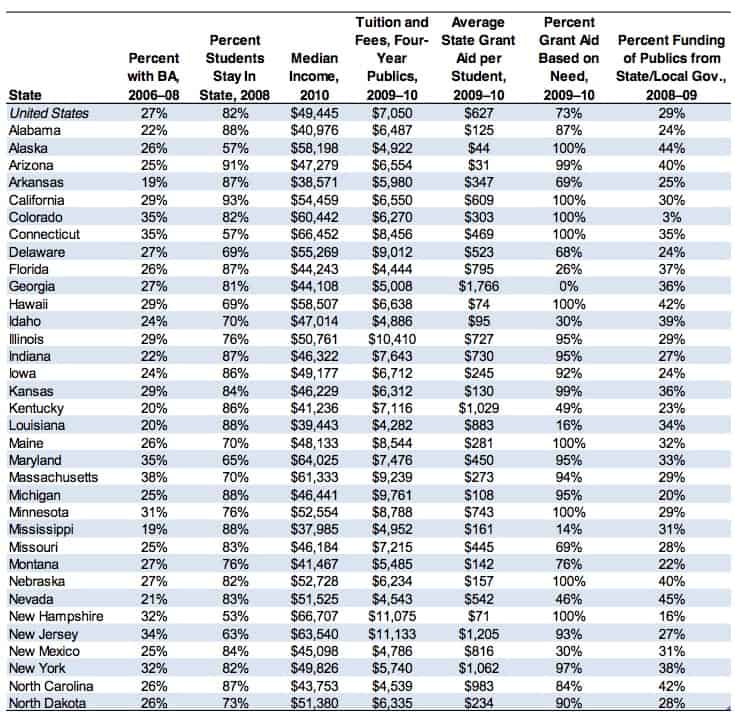 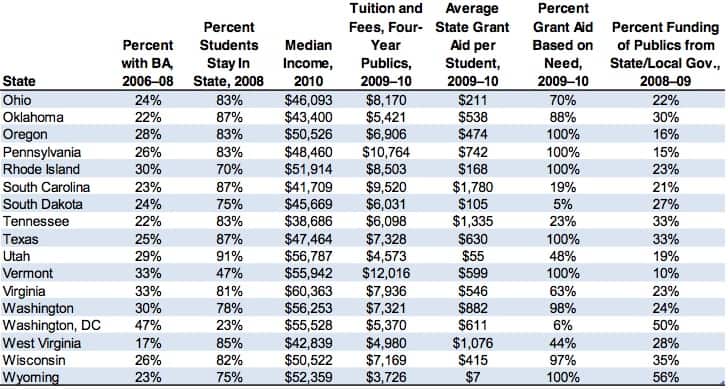 I agree with the report that with limited resources, states should be directing their money to the students who actually need help to attend college. The report (Beyond Need and Merit: Strengthening State Grant Programs) recommended that states give their grants to students who have the most financial need and then link these grants to incentives to get the recipients to actually graduate. For instance, a student might be required to take a full class load of 15-credit-hours a semester to keep a grant.

What is painfully clear is that the states aren’t doing enough to support their higher-education systems, which is making the cost of college more expensive for all students heading off to state universities.

9 Responses to Financial Aid Practices in the 50 States