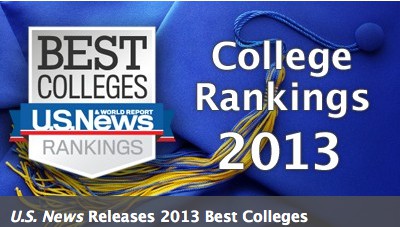 And what a shocker – Harvard and Princeton tied for first in the national university category! Yale came in third. Among liberal arts colleges, Williams got the No. 1 ranking followed by Amherst. Equally shocking. (Please note my sarcasm.)

Despite the annual hoopla over these college rankings, U.S. News is a shell of its former self. It’s not even a magazine anymore. It now rates all sorts of stuff for its survival. As I mention in my book, U.S. News ranks such things as hospitals, cars, diets, vacations and health insurers!

Despite it diminished publishing status, this outfit will generate a tsunami of publicity for itself this week.  It’s college rankings will receive millions of hits  from parents and teenagers who believe that these college rankings matter.

Millions of students have been adversely impacted by the rankings competition because of the actions of the audience that cares most deeply about the numbers – college presidents and their boards of trustees, and by extension, their admission offices. For these folks, US News has provided them with an easy (though deeply flawed) scorecard to measure how their institutions are faring and they are distraught if their school’s ranking stalls out, or worse, drops.

What the Rankings Don’t Measure!

Perhaps aggressive pursuit of higher college rankings wouldn’t be a bad thing if the rankings actually measured what sort of job a college or university was doing to educate its undergrads. One of the 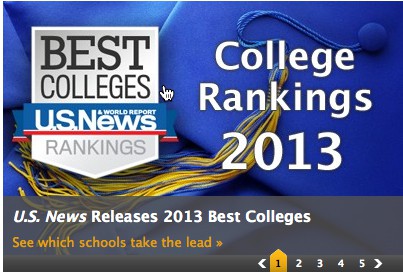 perverse aspects about the rankings is that turning out thoughtful, articulate young men and women, who can write cogently and think critically won’t budge a school’s ranking up even one spot. Curiously enough, U.S. News doesn’t even attempt to measure the type of learning going on at schools.

Unfortunately, the methodology fueling the rankings are a collection of subjective measurements that students and families are supposed to rely upon to pinpoint the schools doing the best job of educating undergraduates. U.S. News relies on proxies for educational quality, but these proxies are dubious at best.

Here are just three of the ways that the rankings hurt students and their parents:

Many teenagers end up as collateral damage in the rankings race because schools that are more selective are rated higher, which encourages them to accept more wealthy students. US News awards schools which generate higher test scores and grade point averages from their freshmen.

Before the rankings became so prominent, rich students typically had to pay full price for college. The majority of grants were reserved for middle-class and low-income students, who required financial help. But with the rankings premium linked to top students, private and public institutions began offering merit scholarships to entice smart, wealthy students to their campuses rather than to their competitors. How do you cough up the money for these deal sweeteners? One way is to raise the tuition price to generate extra revenue for these scholarships and another way is to reduce the financial aid to needy students.

The only schools that don’t offer merit scholarships to rich students are the institutions that don’t have to. Wealthy parents whose children get into Harvard or Swarthmore will be happy to write checks worth a quarter of a million dollars or more. The most elite schools boast that they reserve their aid to the families who need financial help to attend college, but most of these institutions offer admissions to a shamefully low percentage of needy students. Check out this college blog post:

The Nation’s 15 Richest and Stingiest Colleges

US News’ algorithm also favors schools that spurn more students. To increase their rejection rates, some schools will court students through marketing materials and social media that they have no intention of accepting. Here’s another trick: some institutions have made it easy for students to apply via streamlined online applications, which are referred to in the industry as “fast apps.” Schools use this strategy to increase the size of their student body, as well as bump up their rejection rates.

Rankings have become such a high-stakes game that some schools send false data or have acted unethically. And I suspect that most of the schools that are manipulating their figures have never been caught. Those that have been outed include Claremont McKenna, U.S. Naval Academy, Baylor University, Emory University. Here is a post that I wrote earlier this year on the phenomenon:

Colleges and Universities That Cheat

Sadly, what the rankings giant ignores is how much debt students are incurring at their schools. It’s a terrible omission that is certainly one reason why college tuition continues to defy inflation. US News rewards schools that spend freely and the rankings juggernaut doesn’t care if that requires universities to boost their prices and graduate students with staggering debt.

I wrote a post about this phenomenon last year for my CBS MoneyWatch college blog:

Malcolm Gladwell wrote a fascinating article for The New Yorker last year on college rankings in which he talked about the incentive of institutions to turn their campuses into lavish palaces and stick the bill with the kids:

Finally, I’d urge you to read an article in the Washington Monthly that focuses on George Washington University, one of the countless schools that’s been guilty of this bad behavior. If you want to know more about the way the rankings game is played, read this excellent piece:  The Prestige Racket

Why US News’ College Rankings Are a Joke

For any parents who can make it to San Diego during the last two weekends of September (Sept. 22 and Sept. 29), I will be holding my quarterly college workshops through the University of California, San Diego Extension.

Workshop No. 1: Shrinking the Cost of College (Sept. 22) shares what you need to know to make college more affordable.

Workshop No. 2: Finding the Right College Workshop (Sept. 29) focuses on how to increase your child’s chances of getting into schools, evaluating schools academically, using college rankings the right way and much more.

UCSD Extension has received tremendous feedback from participants at these college workshops, who have agreed that they are definitely worth attending. The early-bird price for the workshops is $75, which is a 25% discount off the regular price.

All workshop participants will receive an electronic copy of my 75-page workbook, Shrinking the Cost of College:  Great Ways to Reduce the Cost of a Bachelor’s Degree.

You can learn more about the workshop here:  Lynn’s College Workshops.

You can sign up for one or both workshops here:  UCSD Extension.

2 Responses to How U.S. News’ College Rankings Can Hurt You