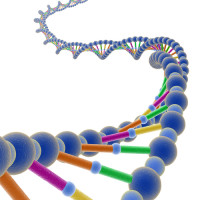 By Lynn O'Shaughnessy on February 7, 2014 in Academic majors, Academics, Careers

Teenagers often pick college major without knowing much  about what they entail or whether they can handle the work.

I was thinking about this today when I read a new report from ACT Inc., entitled, The Condition of STEM 2013. The report shared statistics on the number of high school students in the 2013 graduating class, who were interested in majoring in a STEM (science, technology, engineering and math) discipline and how many students actually were prepared to tackle these tough subjects. I wanted to share some of the STEM report’s findings.

1. According to the ACT report, interest in the STEM majors is high and I assume a lot of it has to do with endless media reports that focus on the majors that generate the highest salaries.  Nearly half (48.3%) of all high school grads, who took the ACT, expressed an interest in a STEM major or career.

2. As you can see from the chart below, 2013 high school seniors struggled the most with science while taking the ACT with only 39% of the seniors showing a readiness to do well in college in all four academic areas: 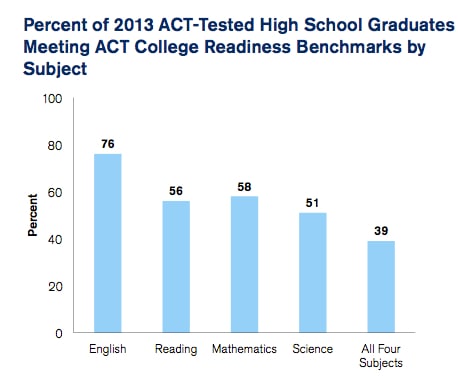 4. Students interested in STEM have higher education aspirations and their parents are more likely to have attended college.

6. Many of the students who have expressed an interest in a STEM field are not ready to tackle these subjects in college. In the chart below, you will see how many students, who want to go into a medical or health occupation, are academically prepared in math and science: 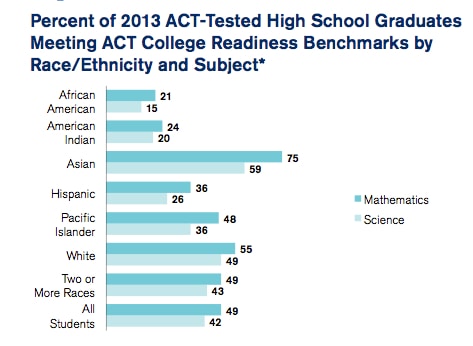 Coincidentally, a mom, who is a long-time visitor to my blog, sent me a note about her son, a freshman at a liberal arts college in New York, that focuses on this very topic. Denise sent me her comment in reaction to this college blog post:

Picking A College Major for Money

Heading to college, Denise’s son thought he wanted to be a physician. I believe you’ll appreciate his experience about pursuing this goal and keep in mind that this is a child who is actually prepared mathematically for college:

My son is living your advice as we speak. He started his freshman year of college in August as potential pre-med major. Sounds good to most parents! But it was not his true calling or passion. I was relatively supportive when he chose it, but I think much of his decision was influenced by friends, whose families include doctors, surgeons and so on. He likes the look of that nice life, and the respect it garners. In high school he did well in sciences, but more so chemistry than biology. He has always been what I’d call a math kid, and he enjoyed economics, too.

So, first semester grades (at a private liberal arts school in NY) were not good. I think he was probably overwhelmed with the amount of work of too much science. He dropped his pre-med notions and is continuing with math and some history, poli sci and econ. Time will tell what major he chooses, but he definitely seems happier about his academics.

I am grateful that he discovered this about himself early on, and that he still likes college and his new friends. I told him that it’s all part of the learning process: Know thyself! Better to face it before going down a path of stress and anxiety.

What’s important is that high school seniors are prepared academically for the rigors of college. Because of grade inflation, having a great GPA will not indicate whether a teenager  is equipped to handle STEM courses in college, which are typically the most challenging you can take.

This is a fear that I had for my son Ben, who had expressed an interest in engineering or physics in high school. Ben was getting “A’s” in his math classes, but I concluded that these courses were too weak and Ben agreed. Consequently, Ben enrolled in a community college math class beginning every semester starting his junior year in high school. It wasn’t easy, but in May Ben will be graduating from Beloit College with a mathematics degree.

2 Responses to Is Your Child Prepared to Major in a STEM?