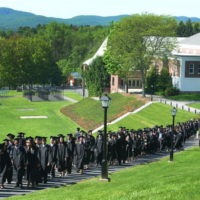 By Lynn O'Shaughnessy on May 9, 2016 in Academic quality, Academics, Admissions

Paying for college is hard enough without adding a fifth or six year to the tab! And yet most college students do not graduate in four years.

Many, many parents whom I’ve talked to over the years seem shocked by this reality.

In fact, when I give talks to parents in California, I almost always hear a visible gasp from the audience when I reach the slide in my PowerPoint presentation that shows the shockingly low graduation rates of many California state universities.

Take a gander below at the public universities in California that have the very worst four-year grad rates. No. 1 on this hall of shame list is California State University, Dominquez Hills where only 3.8% of its students graduate in four years! 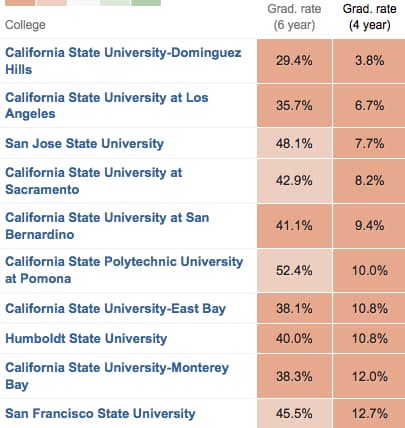 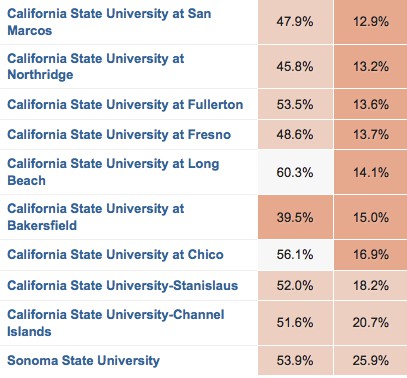 I hope this depressing chart will serve as a wake-up call for you to investigate grad rates for your relevant schools.

Here are the nationwide graduation rates as complied by the federal government:

Not surprisingly, the most elite schools, which primarily educate wealthy students, enjoy the highest four-year grad rates. The parents of the students attending these schools are much more likely to be able to pay for a bachelor’s degree and watch their children graduate in the traditional eight semesters.

Another explanation for high grad rates is that elite schools only accept exceptionally qualified students, who have the academic ability to earn a bachelor’s degree on time.

Below are the schools with the nation’s highest grad rates. The University of Notre Dame enjoys the highest four-year grad rate of any school in the country. 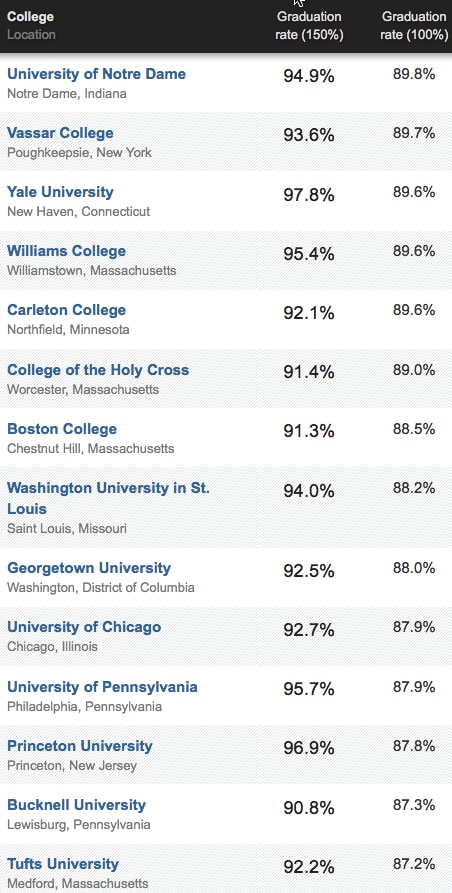 In contrast to the experience of wealthy students, plenty of other students have to drop out of school, at least temporarily, or transfer to a cheaper institution because they can’t afford to continue. These students can be less likely than their wealthy peers to handle the rigors of college.

Another huge problem for students at less selective schools, like many of the Cal State campuses, is that students can’t get the classes that they need to graduate on time.

Schools with low grad rates would like you to believe that it’s all their students fault for failing to graduate, but this is largely a cop-out! Universities with students from similar demographics can have wildly different graduation outcomes. Among otherwise similar institutions, according to the Education Trust, a highly respected think tank, graduation rates can vary by as many as 20 percentage points.

What’s the explanation for this? Successful universities make it an institutional priority to increase the chances that all their students, regardless of their socio-economic background, graduate on time!

I want to emphasize that all these four-year grad rates are based exclusively on students who start out as freshmen as full-time students. Students who begin college part-time do not impact the rates of any schools.

What You Need To Know

You can not only find significant graduation differences among schools that attract the same kind of student body, but that also sport the same price tag.

One reason why Hampshire’s four-year grad rate is so low for an expensive liberal arts college is because only 82% of its freshmen return. In contrast, 98% of Amherst’s students return after their first year.

When a significant percentage of freshmen leave a school, it hurts the institution’s grad rate since the federal graduation calculation counts those departing against a school’s overall graduation rate.

When researching schools, you obviously also need to check any school’s freshmen retention rate, which provides the percentage of students who stick around for their sophomore year.

In addition to being a traumatic experience, unhappy students who leave a school can make a college degree far more costly. Transfer statistics from the National Student Clearinghouse Research Center indicate that an alarming percentage of students ultimately transfer out of their original schools.

Among four-year institutions, 36.5% of students who start at a public college or university end up transferring elsewhere and 34.3% of students at private nonprofit schools transfer too. Wow!

Here are the sources that I recommend to research four-year grad rates:

College Completion: Microsite of The Chronicle of Higher Education.

A lackluster grad rate shouldn’t be an automatic deal breaker.

If a grad rate is troubling, research what it takes to graduate in four years. Being in an honors college at a state university, for instance, could make the path to a four-year degree smoother. In contrast, students pursuing engineering, nursing or some other majors might find it difficult to graduate in the traditional four years at some institutions.

The best way to cut the cost of college is to become an educated consumer. You can learn how by attending my popular online course, The College Cost Lab.

On June 6, I’ll be launching The College Cost Lab, but if you sign up now you’ll get access to the class beginning on Memorial Day weekend!

I hope you register today!