By Lynn O'Shaughnessy on May 15, 2012 in Admissions, Applying, Ivy League, Universities

Today I am reprinting an article written by Lee Bierer, a friend of mine, who is a nationally syndicated columnist and independent college counselor in North Carolina. Lee writes the Charlotte Observer’s weekly Countdown to College column, which is syndicated nationally to McClatchy Newspapers.

I asked Lee if I could reprint her column because it reinforces what I’ve been saying for years: families should cast a wider net when they look for colleges. Here’s another way of putting it:  Let’s show some imagination when devising a college list.

The build-up was big, but boy, did he deliver. Robert Franek, senior vice president/publisher at Princeton Review and author of The Best 376 Colleges and The Best Value Colleges, was recently a guest speaker at Myers Park High School in Charlotte.

Franek is nothing if not informative, interactive, energetic and entertaining. He began with two simple facts:

Franek got everyone involved from the get-go. “Who here is concerned about getting into a good college?” he asked.

All hands were are raised.

“Who has fear or anxiety about the college admissions process?”

All hands remained up.

Franek suggested that everyone take a deep breath as he observed, “We’re all scared.”

In the Princeton Review’s Hopes and Dreams survey, everyone was united in their fear. According to the survey, the No. 1 worry for students is that they will get into the school of their choice, but won’t be able to afford it.

Franek asked students and parents to write down the names of three colleges they would like to see themselves or their children attend, with the caveat that neither financial aid nor the college’s level of selectivity were factors – just where they would like to go to college if there were no obstacles. Franek gave them a minute to think and then shouted, “Cross off any Ivy League schools.” Okay, not much reaction.

The list went on until he ticked off roughly 25 colleges. He then asked “How many of you have three colleges left on your list? How many have two? You see, everyone is applying to the same 25 colleges and universities.”

So what’s the take-away message?

Students should have a good mix of colleges on their college list, Include a few of the usual suspects, but teenagers should try to find one or two schools that meet their criteria but don’t have as many applicants from their high school.

Read more at The College Solution:

If you want to learn more about students’ tendency to apply to the same group of colleges – and why that’s a bad idea, read these posts that I’ve written during the past few months on my college blog: 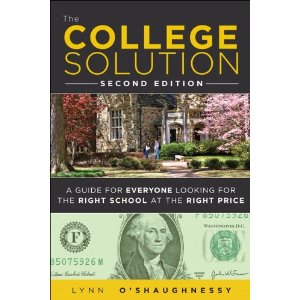 Where Students End Up Attending College

Lynn O’Shaughnessy is the author of the newly released, second edition of The College Solution: A Guide for Everyone Looking for the Right School at the Right Price.

Stunning: How Many Are Borrowing for College
Financial Aid Practices in the 50 States