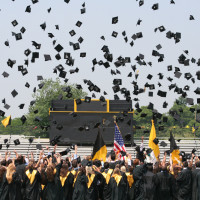 By Lynn O'Shaughnessy on January 16, 2013 in Admission practices, Admissions, Applying

A report from the College Board, Trends in College Pricing 2012, clearly dispels the notion that colleges are impenetrable fortresses that turn away nearly all who dare apply.

If you look at the pie chart below, you’ll see that nearly half of all four-year colleges and universities accept all comers or at least 75% of its applicants.

Only 2% of institutions accept less than 25% of their applicants. These 60 elite schools (out of 2,421) educate just 3% of the nation’s full-time undergrads who are attending four-year institutions. 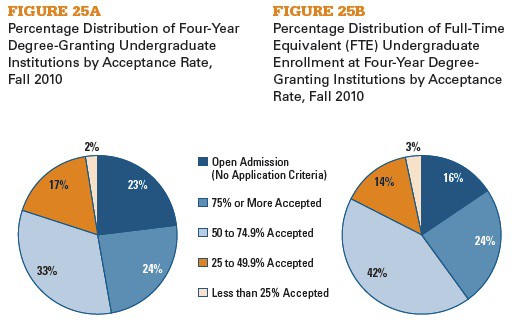 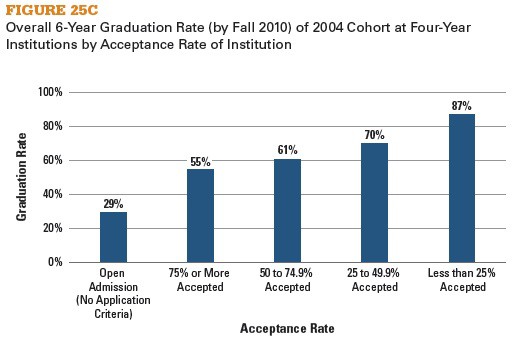 Most Expensive and Cheapest Flagships

While people assume that their state universities will always be cheaper than private schools that is not always the case when financial aid and scholarships are factored in.  What many people don’t realize is that a wide variety of prices exist among state universities.

Among public flagship universities in the 50 states, Penn State has the dubious honor of charging the highest price for tuition and fees ($17,266) and the University of New Hampshire isn’t far behind. In contrast, the University of Wyoming charges the lowest ($4,278) followed by the University of Montana. (Sorry this graphic spilled over, but if I minimized it, it would be even harder to read.)

During the past five years, average published tuition and fees at public four-year institutions increased by $1,850 (in 2012 dollars) from $6,810 to $8,660. About $1,410 of this increase was covered by increases in grant aid from all sources and federal tax credits and deductions.

The average net tuition and fees for private schools (after subtracting grants from all sources and tax credits) was an estimated $13,380 for the 2012-2013 school year. For this school year, full-time students at private colleges and universities received an estimated $15,680 in grant aid and tax benefits. When you add  in the typical room and board charges of $10,460, the total net price was $23,840.

4 Responses to The Latest on College Prices and Selectivity