By Lynn O'Shaughnessy on November 23, 2011 in Admissions, Colleges, Money, Parents

Since this is the week when we contemplate on what we have to be thankful for, I wanted to express my own thanks.

I am grateful to all of you who spend time on my college blog. I appreciate each of my visitors and especially the loyal ones who stop by by regularly. I want to give a special shout out to all of you!

The number of visitors to my blog has been climbing. I know this because of Google Analytics, which I consult every morning. And sometimes more than once during the day. One out of four of my visitors are from California, which isn’t too surprising since it’s the biggest state and it’s also where I live (San Diego). Here are the states that were responsible for my biggest traffic numbers in the last month. 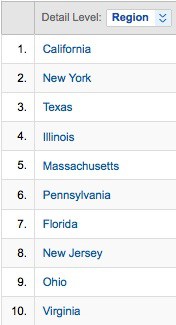 Why Write About College?

Google Analytics can’t measure my extreme gratitude for being allowed the freedom to pursue my intellectual passion, which is covering the higher-ed world.  I became intrigued by it back in 2005 for pragmatic reasons when my daughter was a sophomore in high school. I realized  before Caitlin did that she wasn’t going to get in the University of California, Berkeley, because her class rank wasn’t quite high enough. If you aren’t in the top 12.5% of your class — realistically much higher — you don’t have a chance.

Like a lot of kids in California, Caitlin had dreamed about attending this school (her dad earned his undergrad in English literature there) or one of the other premiere UC campuses because that’s what smart kids do. Sadly most teens don’t appreciate all the options they really have.

Caitlin started considering private schools after someone recommended Colleges That Change Lives, which is a wonderful book about the beauty of largely lesser known liberal arts colleges. (With the author dead, it’s quite outdated now, but I hear that a new edition is in the works.)

I was a financial journalist at the time and I decided to explore who gets money for college and whether Caitlin would qualify for some of it.  I started producing stories on college issues for magazines such as Money Magazine, BusinessWeek, Consumer Reports Money Advisor and other publications that I wrote for as a financial journalist. What I learned helped us find lovely schools, which were less expensive than I had originally feared, for both Caitlin, who graduated in May from Juniata College and my son Ben, who is a very happy sophomore at Beloit College. I am also grateful and relieved that Caitlin beat the odds after graduation and found a great marketing job at a toy company in San Diego.

I became so amazed at how little press coverage existed about how families can make college more affordable that I eventually weaned myself off  covering financial topics like mutual funds, retirement planning and stocks/bonds and dedicated myself to writing and speaking about college issues. It was a rather painful transition financially, but worth it. Every day I learn something new, which is very cool. My desk is covered with print outs of reports and articles on subjects ranging from professor workloads to how colleges should become transparent in revealing student outcomes.

I am also grateful that this year I was able to revise my workbook, Shrinking the Cost of College, and I appreciate all the kind words that I’ve had about it from people who have used it. (I do wish more people would buy a copy! It would make a great holiday present.)

I am also thankful — and I’m not going to lie — stressed out about my latest project. I am writing the second edition of my book, The  College Solution: A Guide for Everyone Looking for the Right School at the Right Price. I estimate that 80% of the book will be new and I need to have the darn thing finished right after the holidays. That explains the stress. The book is supposed to be released in April.

The only thing that I’ve got to show you right now is the proposed cover. I am excited about the photo that I found for the book, which I spotted on the Colleges That Change Lives website. I checked out the photos for Rhodes College on the site because I knew, having lived in Memphis for three years after my college graduation, that it is a gorgeous campus. In the final version, the dollar bill will be smaller and the college scene bigger. (If you’re curious I don’t know what school is on the cover of the first edition of the book. The publisher used a stock photo.) 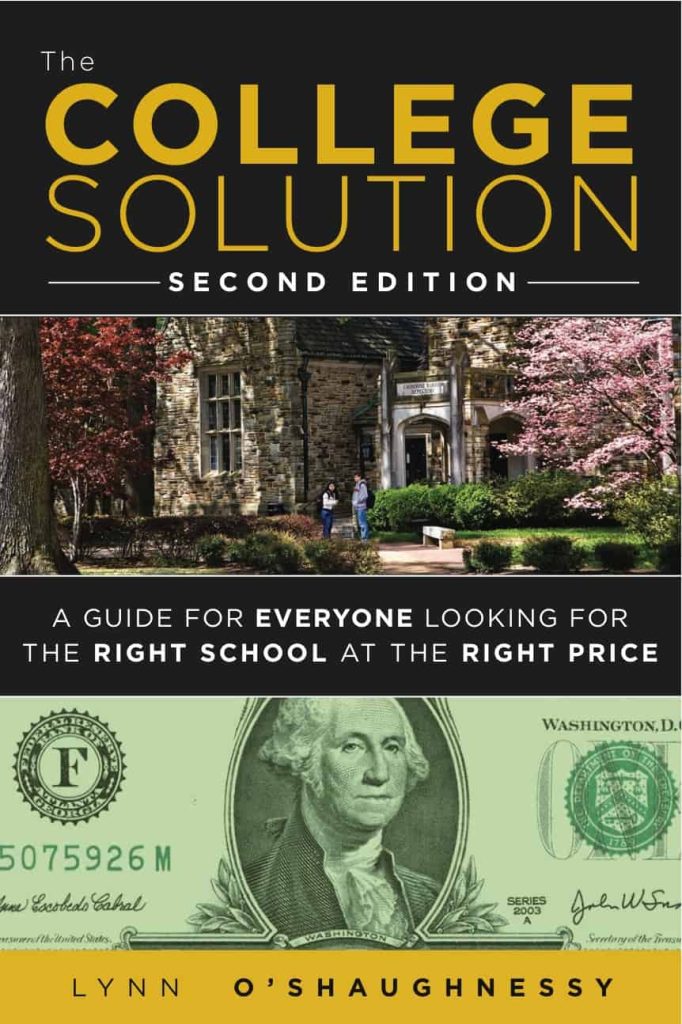 Finally, everyone who has emailed me with a personal story about how my work played some role in finding a great college and paying for it, I thank you for sharing your journey.  You can’t see me, but right now tears are welling up in my eyes just thinking about some of the stories.

Caitlin, my husband and I will be flying up to San Francisco today to be with some family for Thanksgiving and I will be back here at The College Solution in a few days.

In the meantime, I hope every one has a Happy Thanksgiving!

Should You Apply to a Reach School?
Will Saving for College Hurt Your Chances for Financial Aid?

One Response to Why I Am Grateful