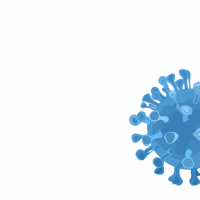 Colleges have been running out of time to release their final plans for the start of the fall school year.

Higher-ed observers assumed that colleges would have to start revealing their final plans sometime in July. Problem was, the vast majority of schools didn’t want to go first.

A Midwestern college, for instance, would be loath to announce it was moving all its classes online in the fall because its competitors could pounce on that and recruit that school’s disappointed students.

It’s not surprising then that some of the most highly ranked research universities in the country have announced their plans first. They can afford to share their news because students will not abandon these trophy institutions.

Right before the July 4th weekend, Cornell released its plans that allows students to return to campus while offering some classes online and others in person.

On July 6, Harvard and Princeton unveiled their plans for the 2020-2021 school year that guarantees students won’t be happy.

Harvard will permit 40% of undergraduates to live on campus this fall, including the freshmen class and those who need to be present to progress academically. All courses will be online. Depending on the pandemic, a new set of students, with seniors having first priority, will attend in the spring semester.

Princeton’s plans to bring freshmen and juniors back in the fall to attend online classes and seniors and sophomores will get their chance in the spring. Princeton is reducing tuition by 10% while Harvard is sticking with its published price.

Some things to think about…

1. Now that some Ivies have released their plans, we should start seeing final plans for other private and state schools this month.

2. Since COVID-19 uprooted our lives, colleges had been announcing their tentative plans for the fall, but it’s easy to see how many of the plans are more aspirational than realistic.

Exhibit 1 is the number of institutions that have said that they would be holding in-person classes in the fall.

For months, The Chronicle of Higher Education has been keeping a running tally of the plans of 1,075 private and public institutions and 60% have said that they will be holding classes on campus in the fall.  Twenty-three percent say they will offer a hybrid solution – a mix of on-campus and distance learning. 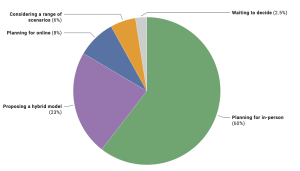 With Harvard and Princeton leading the way on embracing a hybrid model for the new school year, they can provide ammunition for more schools to say that that will be their approach too.

3. On many campuses there have been battles among what administrators have envisioned for the fall and what faculty will go along with.

The conflict makes sense for a lot of reasons including this reality – many professors are older and more susceptible to contracting the corona virus. These professors are expected to teach students, who are far less likely to take the virus seriously and are far more likely to act recklessly. That’s a toxic combination.

Schools can insist that they will work incredibly hard to keep everyone safe on campus and make sure 18- and 19-year-olds act responsibly. You’ve got to wonder, however, how can they could possibly pull this off when they have failed miserably to successfully deal with a long-time campus scourge – drunken college students.

It’s not hard to find examples of revolt:

Faculty at such institutions as the University of Illinois, Penn State, Notre Dame and SUNY campuses, have signed petitions complaining about not being consulted and for plans for in-person teaching. More than 850 faculty at Georgia Institute of Technology have signed a letter that opposes the reopening plan that only “strongly encourages” students to wear masks. Professors at Montana State University are also pushing back against reopening policies including wholesale, in-person learning and the absence of a mask mandate.

4. The steps colleges can follow in an attempt to keep everyone safe will vary widely.

Harvard, the nation’s richest university, says that all undergrads will be living in single dorm rooms, the school will be testing students every three days (!!) and contract tracing will be followed. It’s extremely unlikely that most colleges will be able to do a fraction of what Harvard is planning.

Here is something to think about:  Even with it’s massive resources and safeguards, Harvard doesn’t think it’s safe to bring all its students back on campus, much less let any of them set foot in a classroom! What does that portend for most schools?

University of California, San Diego plans to test students once a month, which I doubt most schools can do. And that’s not only because of the expense, but also availability of tests.

Before heading back to school, parents and students need to know what the plans are for the relevant campus. At an extremely bare minimum, face masks need to be mandatory in all public spaces except perhaps outdoors with social distancing that needs to be enforced.

5. It’s clear that college will be an entirely different experience for students for the coming academic year.

Robert Kelchen, an associate professor of higher education at Seton Hall University, whom I follow on Twitter, characterized it this way: 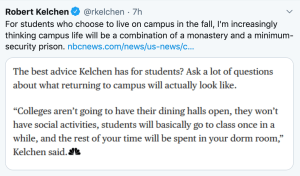 6. Be careful to check college housing contracts. Some schools are requiring students to sign a document that states that the room/board charge won’t be refunded if the pandemic forces a school to send students home.

Schools that have gone this route include Virginia Tech, Washington State, South Florida and Western Carolina.

7. Some of the small, residential private colleges, with low endowments and heavy dependency on tuition, were already struggling with attracting enough students in our pre-mask world. Some of these schools are not going to make it.

Check out the financial security of private colleges – pre-COVID – with Forbes financial health ratings. With so many less well-known colleges still looking for students, it’s not too late to bail and find another school.

8. This will be an excellent time to take a gap year.

The traditional college experience is going to vanish for at least a year. If your child has gotten a tremendous price for the year – thanks to COVID-related discounting – then you’d need to weigh the good deal you’ve gotten versus a child’s 2020-2021 experience and the health risk.

Even at this late date, many schools will accept requests to defer an admission for a year. Colleges would rather hope to get a student a year from now than not at all.

9. The U.S. Department Education released its ill-conceived guidance yesterday on how international college students will be treated during the coming school year.

The federal government will only allow international students to stay in the U.S. if their college offers at least some in-person classes. If a college switches to strictly online learning or closes its physical campus during the year due to the pandemic, international students will have to return to their homes or find a school that still has in-person classes. Of course, this is ridiculous and will cause great hardship to these students.

I agree with college insiders who believe that President Trump wants to coerce schools to have in-person classes and punish those that don’t. International students have been a financial lifeline for private and public colleges for years and the prospects of losing these students will make an already bad financial situation worse.