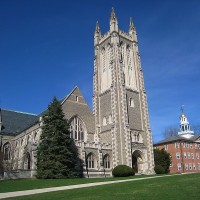 Today I’m sharing a post written by David Kochanek, who is the publisher of LiberalArtsColleges.com, a site dedicated to providing students and parents with the information they need to make intelligent college decisions. In his post he examines the the beauty of pursuing a liberal arts degree from the perspective of Williams College, an elite institution, which has tracked where more than 15,000 of its graduates have ended up. I urge everyone to read it. Lynn O’Shaughnessy

Wondering which college will propel graduates into high-paying jobs? A recent Forbes ranking of top colleges compared how much students paid for their education and what kinds of job opportunities those graduates found when upon graduation.

Interestingly enough, three private liberal arts colleges were included in the top 10 schools and one liberals arts college outranked most of the top Ivy League schools when it came down to value of a degree. Williams College ranked #2 the last two years (only behind Princeton).

Everyone assumes you’ll get a top notch job if you graduate from Massachusetts Institute of Technology or from Brown University, but who imagined a small liberal arts college would outshine the reputed best of the best?

Richard Nesbitt, director of admissions for Williams College tells us that the key to career success is the development of critical thinking and communication skills. 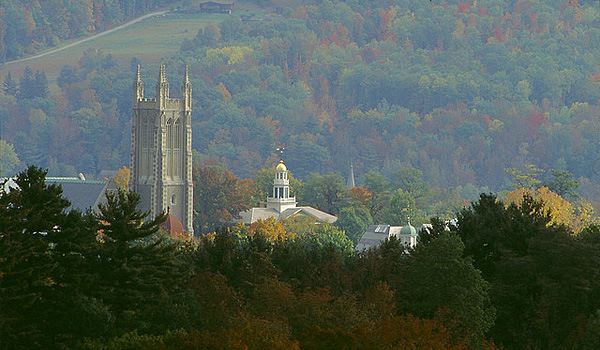 “I understand that it might be counterintuitive to think of, say, art history or pure mathematics as a wise and practical major for life-long career preparation,” Nesbitt says. “But the seminar and tutorial classes that define a Williams education teach students to think for themselves:  to challenge conventional thinking, to examine problems from different perspectives through critical reading and research, to engage in discussion and debate, to synthesize conclusions and to defend carefully considered positions both orally and in writing.”

He makes a point that is worth examining.

Are undergraduates at big name Ivy League schools or large universities being taught how to debate, discuss, negotiate and present an argument, both orally and in writing? These are the very skills needed for long term career success and desired by many top employers.

“In a world where the only constant is rapid and inevitable change,” Nesbitt continues, “it is essential for college students to develop these skills that will allow them to be global citizens and leaders, and to adapt to emerging fields and changing career paths.”

Many college students are happy to go to school to get a degree and settle into a fairly standard career path, but the students who want to be game-changers are looking for an exceptional education.

Adam Falk, president of Williams College, touched on the value of a liberal arts approach in his 2010 inaugural address when he quoted Jack Sawyer (Williams College president, 1961-1973), saying this:

“The most versatile, the most durable, in an ultimate sense the most practical knowledge and intellectual resources which they can now be offered are those impractical arts and sciences around which a liberal arts education has long centered: the capacity to see and feel, to grasp, respond and act over a widening arc of experience; the disposition and ability to think, to question, to use knowledge to order an ever-extending range of reality; the elasticity to grow, to perceive more widely and more deeply, and perhaps to create . . .  to live a life usefully, to help things in which one believes on their way.”

Many Majors, Many Career Opportunities

Satyan Devadoss, a mathematics professor at Williams College decided to visually display the relationship between college major and career path for some 15,600 Williams alumni. He took on this research challenge (with a class of undergraduates) and came up with a fascinating chart, displaying the impact of college major on career opportunities.

The charts map the majors and career opportunities that 15,600 Williams alumni actually took. You can check out the study summary and interactive charts here. (Below is a screen capture of one of the charts.) Take a look at the different majors and see what career paths the Williams College graduates pursued. You’ll be amazed at the wide range of careers and opportunities. 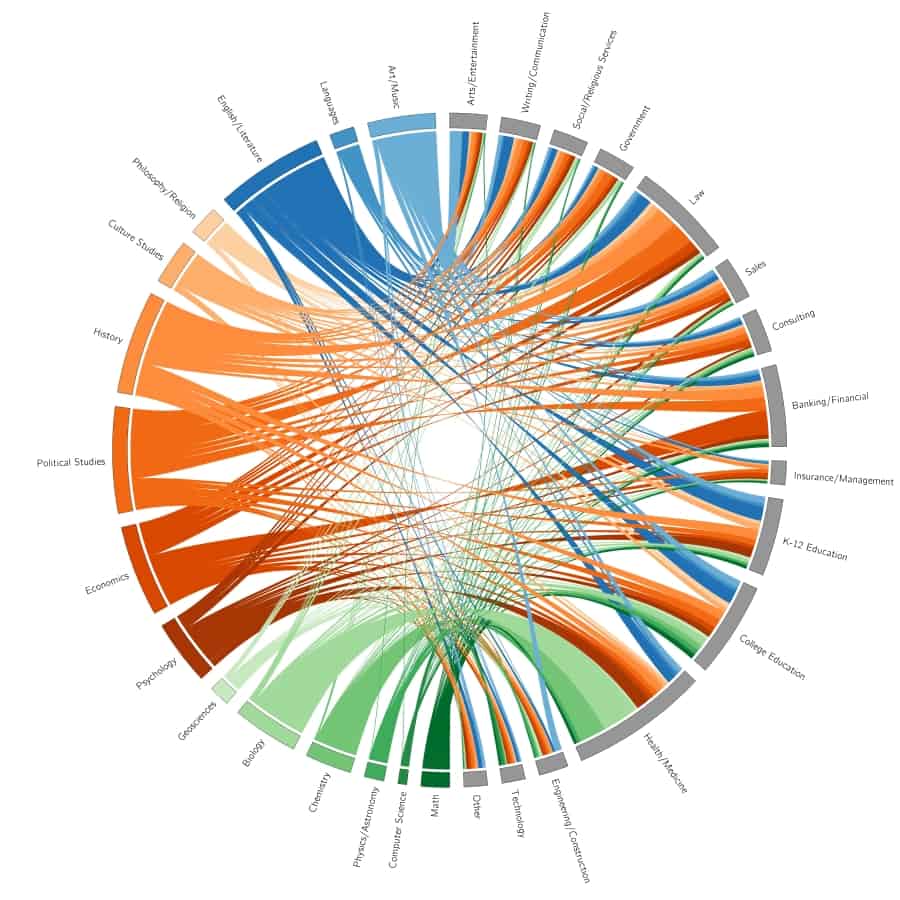 What results did Professor Devadoss uncover? His project proved that a liberal arts degree is an incredibly flexible and powerful foundation for a variety of careers.

Most students enter their freshman year in college with little idea of their long term career aspirations.  And schools know that there is a very good chance that whatever major a new student chooses will not be the same major in which they graduate.

If fact at Princeton, the admission staff tells prospective students not to worry about what major they choose on the application. Their statistics tell them that 70 percent of Princeton graduates end up completing a different major than what they selected in the application process.

At a time when the focus is on unemployment numbers and mounting student loan debt, it may seem imprudent for a student to go into college unsure of their career path. The logical response would be to have a good sense of what they want to do long term and then find the most affordable school that can provide a degree in that major. But the data says something else.

As it turns out, the better choice might just be to find the best school you can get into that provides a broad foundation in communication, analysis and presentation skills. And the first place to look is the list of private liberal arts colleges.

Superscoring the ACT
7 Weeks To Make Your College Decisions

6 Responses to A Look at Where 15,600 Liberal Arts Grads Got Jobs