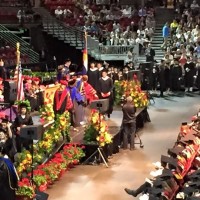 Over the weekend, my son graduated from college again.

A year ago, Ben left Beloit College with his bachelor’s degree in mathematics and a minor in studio art.

On Friday, my 22-year-old son received his master’s degree in education from the University of Denver.

After graduating from Beloit, Ben was only home in San Diego for 10 days before he moved to Denver to start his year with the Denver Teacher Residency program. 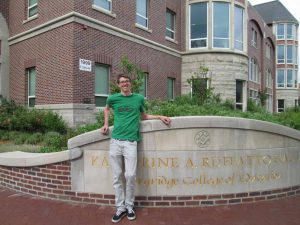 Ben in front of DU’s School of Education

The residency program is a joint effort of the University of Denver and the Denver Public School system to educate new teachers for hard to fill positions including special education and secondary math and science in the district.

For Ben, the last 12 months represented the hardest stretch of his young life. He needed to rely heavily upon the skills that he honed at his liberal arts college, including critical thinking, analyzing, writing and public speaking, to make it through the year.

Compared to any other professions, Ben said he concluded that teachers have to make more instant decisions during the workday than the vast majority of professions. He deals with these kinds of questions all day long…

Should I keep going with the lesson or slow down? How will I group students so they work together? What question can I ask to show that the students understand what I’m saying? Does a student’s behavior merit a consequence versus warning?

Ben’s undergrad years didn’t prepare him, however, for the exhaustion that he often felt during the school week when his day started at 5:30 a.m.. 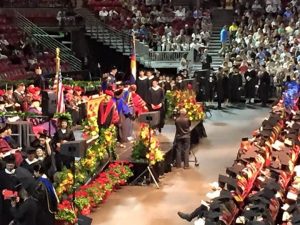 Ben is about to shake hands with Rebecca Chopp, DU’s chancellor.

At Lincoln High School, Ben worked with a mentor mathematics teacher who gradually gave him more time in front of her classes. Ultimately, he was spending most of his time teaching during the second semester and he often was working on lesson plans in the evening.

Through the residency program, Ben also frequently turned to a mentor outside the classroom who served as a calm sounding board for all the issues that Ben was facing.

Going to school himself

During this year, Ben was also working on his master’s degree, which required going to classes at DU on many weekends and one evening a week. He looked forward to Thursdays at DU when he spent the entire day in class.

“Who would have thought that eight hours of grad school classes on Thursdays would be considered a break?” Ben asked. But getting away from the high school and meeting with his peers who were teaching in urban schools and comparing notes kept him going. 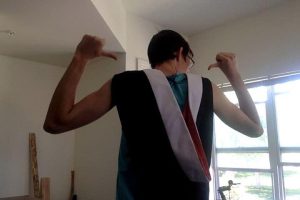 Ben after figuring out how he was supposed to wear a hood with his graduation gown.

Ben told me this weekend that he was extremely happy that he went through the Denver Teacher Residency program. “I think the program creates effective first-year teachers.”

If your child is interested in teaching, and in particular STEM subjects, I would recommend taking a look at residency programs.

Here is a post that I wrote last year about teacher residency programs:

A New Way to Become a Teacher

I’ve included links to some of the residency programs. Ben had applied or was planning to apply to the first five that I listed below before he got accepted into the Denver program.

Urban Teacher Residency United This umbrella group will connect you to many residency programs including Atlanta, Memphis, Philadelphia, Milwaukee, Richmond, Seattle and Chattanooga.

Ben’s first choice was the Denver program because he wanted to live in Colorado. Ben visited Colorado many times growing up because his dad is a Denver native.

Ben now has a couple of months off before he starts his new job as a high school math teacher at P.R.E.P Academy, an alternative school in the Denver school district.

Throughout his residency program, Ben remained committed to becoming a teacher. “I can’t imagine doing anything else,” he told me recently.

I am very proud of Ben and I hope he remains dedicated to teaching the kind of students who need him the most.