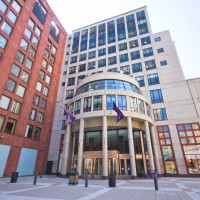 By Lynn O'Shaughnessy on April 22, 2013 in Uncategorized

Is it worth it to attend an expensive private university with a recognizable brand name if you have to borrow heavily?

That was a question that a New York Times reporter tackled in an article on Saturday entitled  Measuring College Prestige vs. Cost of Enrollment.

I wasn’t surprised that the article, which included a few observations from me, was the newspaper’s most emailed article that day. NYT readers devour any stories about prestigious colleges.

In the article, I shared the story of a family whose daughter intends to go to New York University next year. The family’s federal Expected Family Contribution is $0, which means that at least on paper the parents can’t afford to contribute anything. The dad is unemployed. The cost to attend NYU after financial aid will be  $32,000 a year for the family. And get this, the girl is turning down a full-ride to Rutgers.

Among the other people interviewed in the article was a high school counselor at an affluent Chicago suburb who summed up the kinds of choices that wealthy families have when aiming for schools: 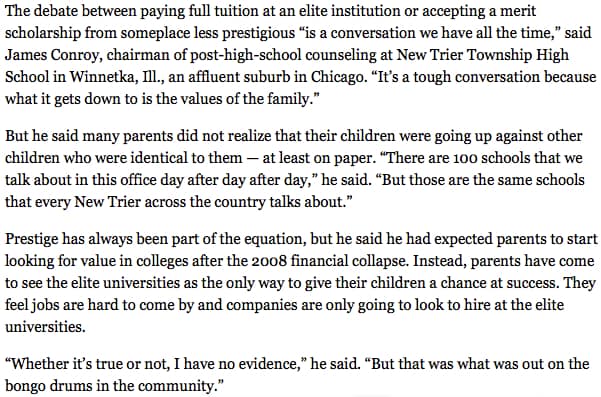 It’s unfortunate that some families (mostly affluent ones) believe that there are so few schools among 2,400 four-year institutions worth attending.

This belief certainly helps these elite schools hike their prices without suffering any consequences. Frankly schools like NYU can continue to charge ever higher prices, while giving lousy aid packages, because there are always suckers who will pay any price to attend a university with a known name in New York City (or other popular big cities.)

Northwestern vs. University of Massachusetts 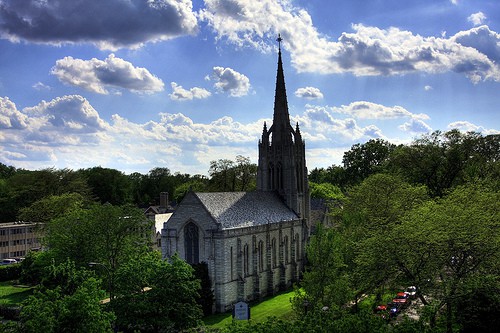 The NYT article prompted a teenager to email me over the weekend who is agonizing about whether she should attend her flagship school or Northwestern University. Here is what she wrote:

Like many students, I am having a difficult time deciding between prestige and affordability. After reading the NY Times article, I hope that you can tell me your thoughts on my situation.

My parents have agreed to pay for 3 years of my college. I have to pay for the 4th year.

I am deciding between UMass Amherst’s Honors College and Northwestern University. I plan on studying film studies and Northwestern has a better film program and film community, but I could worth with Umass’ consortium to make my own film major through a program they have.

If I attend Northwestern, I will be $60,00 in debt. If I attend UMass, my parents have agreed to give me what they would have paid at an expensive school, so I will have $60,000 dollars after graduation to do whatever I want with.

I’m starting to realize that this decision is not about what I “want” right now or which college looks “nicer”. Yet, I am not sure if Northwestern is prestigious enough to really make a difference after college with jobs and alumni.

If I was you, I would go to UMass. I do not think any school is worth going into $60,000 worth of debt. Run a student loan debt calculator to see how difficult this will be. It will also require taking out private student loans (beyond the federal Stafford) and there is no ceiling on the interest rate as you pay it back. There are also no consumer protections for the private loans.

You can do just as fine attending your state school and getting started with $60,000 is awesome.

Smart students  who get into elite schools like Northwestern, but attend other schools will do just as well as those whose who pick the highest ranked schools. That was the message of that Alan Krueger study cited in the NYT articles. It’s not the schools that make the difference but the intelligence and drive of the students themselves.

I wrote about film schools before and I suggest you read the post and the links within it.

Do you Need to Go to Film School?

I think this is a no brainer!

Do you have any thoughts on this topic? If so, please share in the comment box below. I’d love to hear from you.

Does Where You Go to School Matter to Employers?
The Admissions Arms Race: 6 Ways Colleges Game Their Numbers

34 Responses to Deciding Between College Prestige and Cost