By Lynn O'Shaughnessy on September 15, 2011 in Admissions, College readiness, SAT/ACT

The College Board released its latest SAT results this week and the scores were underwhelming.

If you’re wondering how your teenager compared to everyone else, here is a chart that breaks down the scores for critical reading, math and writing. 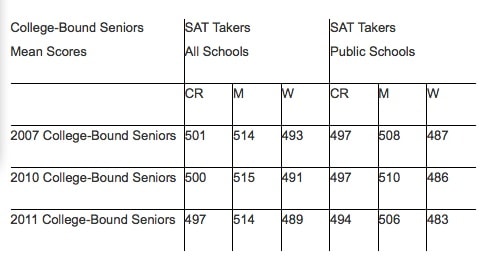 You’ll see that the College Board broke out the scores for all students, as well as for teenagers attending public schools. The  College Board was quick to mention that this was the most diverse crop of students to ever take the test. If you’re reading between the lines you can interpret that this way: Hey, so many poor teens took the test that it brought down the average scores. In all, 1.65 million students suffered through this test.

Clearly there is a wide range of scores among students of various incomes that this chart doesn’t show. In general, the wealthier the students, the better the scores. Test apologists can insist all they want that test prep doesn’t work, but it surely gives students who can afford it advantages. So does simply growing up in a household with affluent, college-educated parents. In fact, students whose family income exceeded $200,000 have experienced an average 45-point gain in SAT points – from 1676 to 1721 – since 2008. That’s remarkable.

Coincidentally, I received an email this week from a dad whose son earned the lowest SAT scores that I’ve personally heard about. His math score was in the 200’s and his critical reading and writing scores were 460 each. The teenager’s GPA is 3.2 and he wants to be a film major.

Here were the dad’s questions:

Q. Will a low SAT math score cause him to not be accepted to a mid-range school, such as Temple University?

Yes it would. In fact, his reading and writing scores wouldn’t help either. At Temple, the 50% mid range of SAT scores are:

According to Temple’s Common Data Set, the university didn’t accept any students whose math SAT score was in the 200’s.

Q. Should we attempt to contact a faculty member in his college major (film) during the admissions process?

I can’t imagine that contacting a professor would help the teenager get into the university or the film department. Unfortunately for him, even stellar students find it incredibly difficult to get into film schools.

At an educational conference in LA this summer, I attended a panel that included admission reps from USC, UCLA, Chapman and Loyola Marymount, which all have film programs, and they shared that students need high test scores and GPA’s to have even a slim chance of majoring in film.

Frankly I found that odd since so many great film director didn’t even graduate from college including James Cameron and Quentin Tarantino, who didn’t bother to get a high school degree. Why does earning a 4.0 GPA in high school make you better qualified to be the next Stephen Spielberg?

Q. Can he transfer to a 4-year school after one year at another 4-year school (he doesn’t want to do the 2 yr. community college thing)?

Yes it’s possible to transfer to another four-year school after one year at some institutions. You can find the transfer requirements for an individual school on it’s profile on the College Board’s website.

To locate Temple University’s transfer information, type the name of the school into the College Board’s College QuickFinder.

After calling up the profile, click on Temple’s Admission link. Scroll to the bottom of that page to find the transfer stats. Here they are: 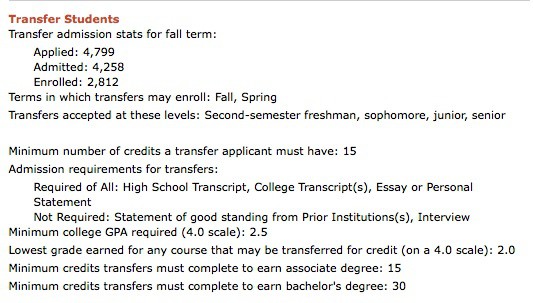 Can This Teen Succeed in College?

What the father didn’t ask if whether this child is prepared for college. The boy’s math SAT scores were so low, it’s hard to believe that he would be capable of college math or science. Of course, it is possible that the teenager skipped a line on the test, which resulted in a misleading score. I think too many parents are lulled into a false sense of security if their child’s GPA is decent, but high school GPA’s can be meaningless.

If this was my child, I would want to figure out if he’s prepared academically for college. According to the College Board’s college readiness benchmark, students who earn a 1550 on the SAT (out of 2400) have a 65% chance of earning at least a B minus as college freshmen. This student’s score is about 1200 or lower.

The good news for this teenager and others is that you can become a filmmaker without going to film schools, which I think are overrated. Here is a blog post that I wrote on the subject:

Do You Need to Go to Film School?

For those who are excited about the prospects of playing around with cameras for four year, here’s a story from The New York Times that might make you reconsider.

I’d be curious if anyone reading this post has any thoughts about this teenager’s academic future and what the family should do. Please use the comment box below if you have any ideas.

What Ever Happened to Shakespeare?

4 Ways to Check Out Colleges and Universities

9 Things You Can Do If You Can’t Visit a College
Should You Retake the SAT?

One Response to The Latest Lousy SAT Results