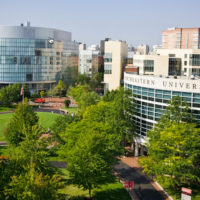 This is the time of year when parents and teenagers stress about their college choices.

Parents whose children have expensive collegiate tastes can struggle with the some variation of the following question:

When money is an issue (and it is for almost everyone), my standard advice is to NOT blow the budget (and potentially the parents’ retirement security) on a wildly popular private university if it comes with a wildly obscene price.

Parents and teenagers assume that these popular schools – mostly research universities congregated on the East Coast – must be worth the cost. They are located in major (fun) cities which families assume will lead to awesome internships and incredible jobs that should compensate for the potentially crushing debt.

In Love With Northeastern University

I heard today from a high-income mom in New York City whose son is in love with Northeastern University, which is charging the family FULL PRICE. The current cost of attendance is $66,000 for one year and it will surely be even more in the fall.

Many elite private research universities in the Northeast award ZERO merit scholarships or just a small percentage because they don’t have to – parents will wreck their finances for these schools. The most prestigious research universities do award need-based financial aid and, with some exceptions, the packages are often among the most generous you will find.

However…at most of the prestigious research universities the percentage of students who are low or middle-income is depressingly low.  (It’s a scandal!) At many of these research universities, 40% to 50% or more of the student body is paying full price. And that means that the students are so wealthy that they don’t qualify for need-based aid even as the price of these schools are now crossing the $70,000 mark!

Universities That Provide Little or No Merit Scholarships

Affluent parents will kill themselves financially if their kids get into institutions such as those below. Next to each university is the percentage of students who receive merit scholarships:

Northeastern isn’t ready to scale back the merit scholarships as dramatically yet. According to the latest figures, 24% of the students received them, but I’d bet that this percentage will decline if it continues to an “it” school.

While Northeastern is a hot property now, it didn’t used to be that way. Twenty years ago the institution was in trouble. An excellent article in Boston University about Northeastern’s calculated rise described the institution back then as a “third-tier, blue-collar, commuter-based university.”

The way the university decided to save itself was to focus on scratching its way up U.S. News & World Report’s flawed college rankings and it succeeded. It’s currently the 39th “best” research university, according to U.S. News.

The teenage boy, who hopes to attend Northeastern in the fall, intends to major in business administration, which happens to be the nation’s most popular major,  He assumes Northeastern, which offers a popular co-op program, would be the best school to launch him into a lucrative business career.

The New York teenager’s other choice is SUNY at Binghamton, which is a top research university in the line-up of New York state schools. The price tag for New York residents at this SUNY is just $25,000! What a deal!!

Concerned about the teenager’s earnings potential, however, the family is leaning towards Northeastern. Not so fast, I suggested.

While I DO NOT think families should pick schools based heavily on future salary, in this case I thought it made sense to mention it in the hopes that the family would save themselves well over $150,000  in the pursuit of one bachelor’s degree. I told the mom about an excellent resource to compare actual average salaries of new graduates.

Educate to Career is the only resource that provides REAL average salaries of students majoring in specific disciplines at individual schools. The nonprofit is pulling the same federal employment figures that the federal government could release if Congress hadn’t forbidden the U.S. Department of Education from doing so. Educate to Career made an end-run against this ridiculous prohibition that resulted after intense lobbying from private higher-ed interests.

I compared the average beginning salaries of new grads with business degrees from Northeastern and Binghamton. And the SUNY school beat Northeastern in every occupation.

Take a look for yourself:

If you want to compare actual average salaries of recent grads at specific colleges and universities, here’s how to do it:

1 Head to Educate to Career.

4 Select the institution, major and state to generate the salary statistics on a school.

Should this New York teen save his mom and dad $150,000 or more and enroll in the SUNY school? Duh. Of course.

The fact that affluent parents agonize over these kinds of choices reflects how crazy prestige and college rankings impact decisions.

8 Responses to Should You Pay More Than $66,000 for Northeastern University?